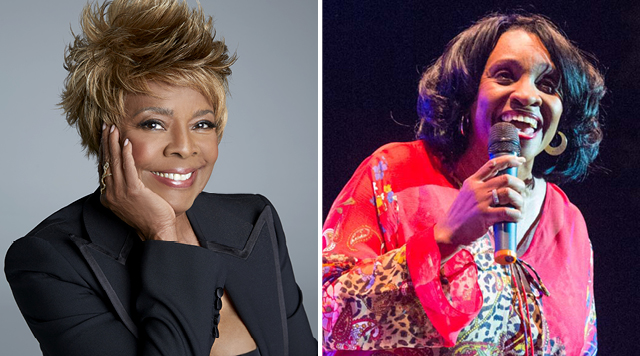 AND SPECIAL GUEST ANITA WARD
September 10, 2022 • 8:00pm The Club Tickets from $29.95 Facebook(Opens in a new window) Buy Tickets(Opens in a new window)
A Mississippi native, Thelma Houston is a dedicated music creator and philanthropist
who started out in the 1960s performing gospel music with the Art Reynolds Singers. In
1967, Houston signed to Capitol Records (home of the Beatles, Nat King Cole, and
Nancy Wilson), and had her first hit song with "Baby Mine." Houston released her first
solo album, Sunshower, on ABC Dunhill in 1969, which was written and produced by
the legendary Jimmy Webb.

After this critically acclaimed debut, Houston signed with Motown Records. Always a
pathbreaker, at Motown, she claimed the top of the pop, R&B, and dance charts with
her signature rendition of "Don't Leave Me This Way." This Gold Record classic gave
Houston the distinction of being the first solo female artist at Motown to win the
GRAMMY Award for "Best R&B Female Vocal Performance."

In early 2020, Houston collaborated with Morrissey on "Bobby, Don't You Think They
Know." Also released the same year was the dance single "Turn Your World
Around" (Radikal Records) with Bimbo Jones. The song quickly rose on the Billboard
Dance Charts to No. 7. As an artist who is always focused on creating, Houston teamed
up once again with Jimmy Webb during the COVID-19 pandemic for the song called
"Someone is Standing Outside." Recent shows include CBS's Motown 60: A GRAMMY
Celebration. Houston’s performance brought down the house. She also recently
performed on the BET special DJ Cassidy's Pass the Mic. During Black History Month in
February, she was honored by the 2022 City of Los Angeles African American Heritage
Month Program as a Living Legend—which she truly is.

Singer Anita Ward is most well-known for her 1979 disco single "Ring My Bell," a number one pop hit in the U.S. and the U.K.

Born on December 20, 1957 in Memphis, Tennessee, Ward developed an interest in music -- particularly gospel -- at an early age. She went on to sing with the Rust College A Cappella Choir (which included recording alongside renowned Metropolitan Opera vocalist Leontyne Price), and recorded an obscure album with her own gospel quartet. After graduation, however, Ward didn't set out to pursue a career in music and instead became a substitute teacher in the Memphis elementary school system. It wasn't long before Ward realized music was too much a part of her life to ignore, and her manager put her in contact with singer/songwriter Frederick Knight (who had scored a substantial hit in the summer of 1972 with "I've Been Lonely for So Long"). Knight signed on to help produce a three-song demo session with Ward, but once the tape was rolling, Knight became so taken by Ward's singing ability that the sessions soon produced an album's worth of material.

Songs of Love After listening to what they'd recorded, both agreed that they were still one song short, which resulted in Knight digging up an old track titled "Ring My Bell," which he had originally penned for a younger singer, Stacy Lattisaw (who would later score several hits in the early '80s). The song's original lyrics dealt with teens chatting away on the phone and even though Knight gave the track a quick lyrical overhaul, Ward was less than enthusiastic about the song. Still, she agreed to record it, with Knight providing most of the musical accompaniment. Recorded over the course of two days, "Ring My Bell" turned out to be the best track of the bunch. It resulted in a recording contract with the T.K.-affiliated Juana label, and the release of Ward's debut album, Songs of Love, in 1979. It didn't take long for "Ring My Bell" to scale the charts. That summer, it topped Billboard's Hot 100 and remained on that chart for five months. A subsequent single, "Don't Drop My Love" -- taken from the quick-to-follow second album Sweet Surrender -- peaked at only number 87. A few songs were recorded during sessions for a third album abandoned prior to completion. They surfaced on various Ward anthologies released during the following decades. Although Ward rarely recorded -- she released a single in 2011 -- she continued to perform into the 2010s.
Cost:
Tickets from $29.95 plus taxes and convenience fees