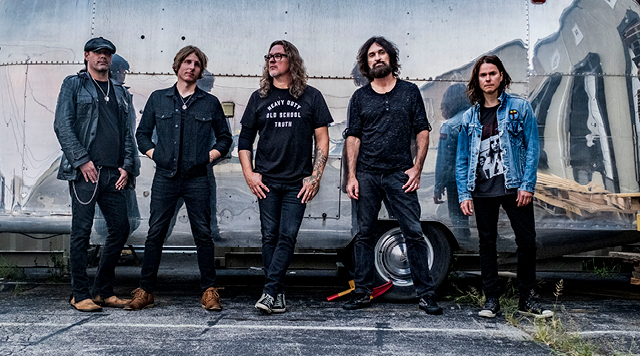 October 29, 2022 • 8:00pm The Club Tickets from $29.95 Facebook(Opens in a new window)
Youtube(Opens in a new window)
Buy Tickets(Opens in a new window)
Wolves is not the record of a band on its downslide, but rather a strong aural statement from musicians who are exploring, reinventing, and creating music to make themselves happy. There’s zero resting on the considerable laurels of Candlebox’s hit singles and albums. And the band is inviting fans, old and new, along for the ride.

It’s a journey that began in 1991 in Seattle, where Candlebox formed, and soon thereafter incited a record label bidding war in Los Angeles. The lineup went quadruple-platinum with their 1993 self-titled debut on Madonna’s Maverick Records and released two more acclaimed albums (1995’s Lucyand 1998’s Happy Pills). The singles “Far Behind,” “You” and “Cover Me,” became ubiquitous fan and radio favorites. But after nearly a decade of hard road work, the band went on hiatus in 2000. Candlebox then regrouped with a 2006 tour, putting out Into the Sunin 2008, followed by 2012’s Love Stories & Other Musings.

Candlebox’s sixth studio album, 2016’s Disappearing In Airports, had a fresh modernity, a vibe that is amplified and broadened on Wolves, so named for a myriad of reasons. “It comes from where we are as humans right now, and what we’ve become,” Martin says. “Yes, there's beauty in these wolves, but there's the pack mentality, and that lone wolf mentality on the other side."

Wolves isn’t a political statement, it’s more a musing on humanity. “I think that as a society we’re headed in a really dark direction. We've become so ‘about ourselves,’ forgetting that we’re all in this together,” Martin says. “We've lost that whole concept of being kind and looking out for one another; now it’s justdog eat dog.”

Music, however, brings people together both physically –in the pre-and post-pandemic times, that is –and emotionally. And Wolves, with songs that tap into a more raucous vibe while being equally powerful on personal love songs, sets off many emotional triggers. For instance, the irresistible “Lost Angeline” relates a story about the early days of Martin’s relationship with his wife. Working that emotion into the recording required a “live looseness in the studio. It was one vocal take for the verses,” says the frontman. “Lost Angeline” would be at home on a roots-rock playlist. “We didn't stray away from anything; if the song sounded Americana, we went there; if a song sounded progressive, we went progressive-we didn't try to stay in our lane, if you will.”

The timeline of Wolves began well before the shitshow of 2020, kicking off in mid-2018, with approximately three months to write and record. Alongside drummer Dave Krusen (who joined Candlebox in 1997); lead and rhythm guitarist Brian Quinn and bassist Adam Kury, Wolves marks guitarist Island Styles’ studio recording debut with the band. (BJ Kerwin, who has toured with Candlebox in the past, will take over drumming duties from Krusen when the pandemic status allows for the band to hit the road in support of the record.)

The chemistry Candlebox conjured playing live in the studio is undeniable and electric. And Martin couldn’t be happier with the outcome. “It can be challenging to be an artist who has enjoyed great success, and then down the line, still has great fans, but never really achieves that great success again,” Martin observes, echoing the lyrical story of “All Down Hill From Here.” “A lot of our friends in bands are in that position now. It’s a story I think a lot of people can relate to, not only musicians. “But,” he concludes, referencing the Wolves’tune “Don’t Count Me Out,” “like the boxer who's on his last legs, he still has an opportunity. You really can’t count anyone out.”
Cost:
Tickets from $29.95 plus taxes and convenience fees