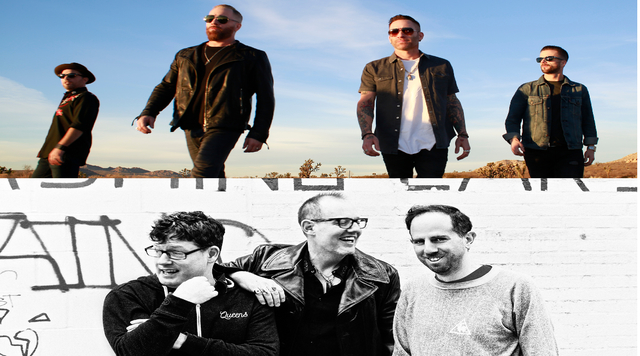 March 28, 2020 • 8:00pm The Club Tickets from $19.95 Facebook Buy Tickets
LIT is considered one of the preeminent bands to have come out of the post-grunge era of the late 90's and helped define an entire generation of SoCal power punk with hard-charging hits like “My Own Worst Enemy,” “Miserable," "Zip-Lock,", and "Lipstick & Bruises." The band has released 6 worldwide studio albums, including their RIAA Certified Platinum A Place in the Sun, and they are currently writing and recording to release new material. The band has remained one of the most active bands from that era and still consists of three original and primary members including brothers A. Jay (lead vocals) and Jeremy Popoff (lead guitar), and Kevin Baldes (bass). Their mega-hit "My Own Worst Enemy" is one of the most broadcasted, covered, karaoke'd, recognizable rock hits of the last 20 years and won them a Billboard Music Award for Modern Rock Song of the Year. Their unforgettable video for "Miserable" featuring Pamela Anderson was one of the top 10 most played songs of 2000. As recently as 2017 Lit found themselves back on the charts hitting #1 on the CMT 12-Pack with their video for "Fast", from their These Are the Days album.


90’s alternative rockers MARCY PLAYGROUND celebrated their 20-year veterancy in the music industry in 2017. That year marked the anniversary of their 1997 self-titled debut album, which included the hit single “Sex and Candy”. In celebration of the anniversary, Slow Down Sounds released the album on vinyl for the first time ever. The album went platinum back in 1997, selling 1.4 million copies, while the radio classic “Sex and Candy” spent a then record 15 weeks at #1 on the Billboard Modern Rock chart.
In the interim years Marcy Playground released four posterior albums “Shapeshifter” (1999), “Marcy Playground 3” (MP3) (2004), “Leaving Wonderland… In A Fit of Rage” (2009), and “Lunch, Recess, and Detention” (2012). The albums demonstrated tremendous periods of creative growth for the group and are recognized as “cult classics” among the band’s dedicated fans. The band has also enjoyed notice by the big screen. Their songs are featured on soundtracks such as Cruel Intentions, Antitrust, Simply Irresistible, Hurricane Streets, as well as many films by writer/director Kevin Smith (Jay and Silent Bob Strikes Back, Zack and Miri Make a Porno).

Cost:
Tickets from $19.95 plus taxes and convenience fees