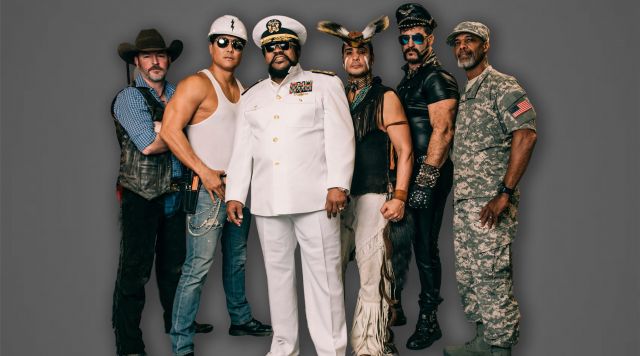 DISCO EXPLOSION!
The Club Tickets from $29.95 Facebook
VILLAGE PEOPLE is the greatest disco group in the world! Their music is part of the International songbook. Their debut album released in 1977, featured the hit singles "San Fransico (You Got Me)" and In Hollywood (Everybody's A Star)".

Village People at the time was simply Victor Willis with the use of session singers. Eventually a group of guys were assembled around him to perform on American Bandstand. Thus began the creation of Village People.

The guys were soon and International phenomenom with the release of the second album titled Macho Man, once again recorded by Victor with the use of session singers. Auditions were held for performers to join Victor however prior to the release of the Macho Man album and many answered the call. Village People were finally a bona fide group.

Next was the five-time platinum album Cruisin which featured the blockbuster hit “Y.M.C.A.” After that was the Go West album, and finally Live and Sleazy. Victor Willis then exited the group but not before leaving them with such smash hits as “Y.M.C.A” “Macho Man” “Go West” “In the Navy” “Magic Night” and “Milk Shake.” With Victor’s departure, the hit era of Village People was over, and so was the disco genre in general. The group soon disbanded.

Over the years, various renditions of Village People (for purposes of live performances) have consistently toured the world since the mid-1980s with use of various replacement lead singers, and characters.

A Taste of Honey in the days of Disco, Janice-Marie’s ‘A Taste of Honey’ received a crash course in the potential of a hit single. Their first recording, "Boogie Oogie Oogie", hit #1 on the International Pop, Disco and R&B charts. The single and self-titled album were certified double Platinum in the USA (Capital Record’s first platinum single) and went Gold in the United Kingdom and Japan. A Taste of Honey nabbed the 'Best New Artist of the Year' Grammy Award along with an additional ‘Best Vocal Performance By Group or Duo’ Grammy nomination. Janice-Marie Johnson received the ‘Best R&B Song’, Grammy nomination, as well, for writing Boogie Oogie Oogie. Another Taste, the second ATOH album, went Gold in Japan and garnered a Gold Single and Album, with "Do It Good". This catchy tune also won the Gold Prize awards at the 8th Annual Tokyo Music Festival and national acclaim in the US.

Rainere Martin - Blessed by God with the gift of voice and a grandmother who filled her heart with beautiful songs, Rainere learned at an early age that she could use her voice to lift a soul and bring joy to all who hear her sing. With an early focus on R&B ballads, an appreciation for the art and craft of performers of all eras, and a desire to find her right niche, Rainere’s early explorations had her performing in theater, music videos, motion pictures, TV, and becoming a sought after entertainer for a variety of social and corporate events, with her appearance on the Nationwide TV show Showtime At The Apollo in New York City earning her a standing ovation. And while all the opportunities fulfilled her desire to delight audiences with song and passionate performance, it was the musical pulse of the 70’s and the era’s great headliner Donna Summer that stuck in her memory.